Nalanda QLD team was on fire during the 2nd Blues Vs Maroons tournament held on 1st October 2017 in Judy Holt Sports Park.

Final
Nalanda scored 202/6 in their 20 overs
Dharmaraja scored 80/6 in 10 overs before the rain stopped the play.

For the 5th consecutive time in Queensland, NALANDA OBA was in the forefront again in organising the 110th Colonel Henry Steel Olcott’s (b. 1832-Passed Away- Feb 17-1907) death anniversary at the Goodna Temple (Buddhist Vihara Queensland), with an alms giving, at a well-attended gathering of grateful past students of Buddhist Schools of Sri Lanka on February 19.

Past pupils & their families of Nalanda, Ananda, Dharmaraja, Mahinda, Anula, Sangamitta, Ananda Balika & few other schools participated in the NALANDA OBA sponsored event. Sharing of Merits is a unique tenet of Buddha Dhamma and this core practice allows honouring and being grateful to the living as well as the departed. Everyone attended accordingly honoured the founding fathers of the Buddhist schools in Sri Lanka.

With Colonel Henry Steel Olcott at the steering wheel and Anagarika Dharmapala forerunner of the revivalist movement, under the banner of the Buddhist Theosophical Society-BTS, helped establish a string of Buddhist Schools, when English mission schools were the fashion.

NALANDA OBA Queensland would like to thank everyone participated, supported to this event and looking forward to meet everyone and many more next year. 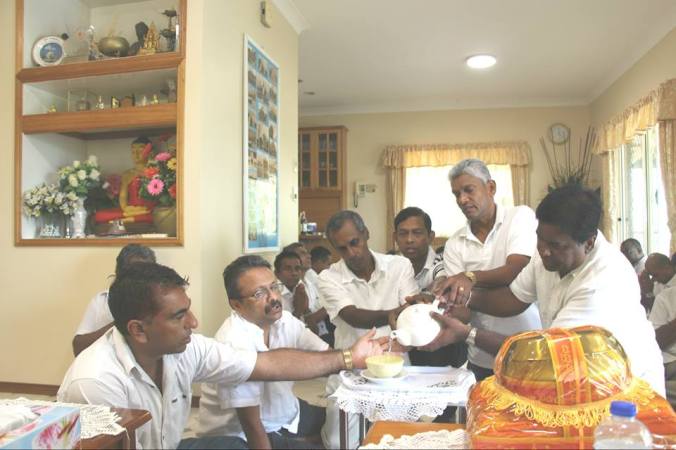 Nalanda team won the 6th BOM encounter in QLD. Ananda won the toss and invited Nalanda to bat first and they scored 196/7 in 30 overs. Deepal top scored with 60 not out and Desh scored 39 valuable runs.

Ananda team gave a great fight and scored 178 and they got all out in 30th over. Damindu scored 65 not out and Uwan was the bowling star for Nalanda getting 3 wickets and Madhu supported well with 2 wickets.

This was the 4th time Nalanda won the QLD battle of the maroons shield and Ananda won the other 2. This is the first time a team was able to win two consecutive matches in highly competitive big match in Queensland.

Sulanga Radio broadcast the match live so that everyone around the world was able to stay updated with the scores, music etc…

And then went on to with the finals beating Royal team with ease.